There are places where, due to different circumstances, stories of ghostly apparitions, extraordinary presences, meetings, events, etc., are perceived by people with special sensibilities.

In Aokigahara, the whimsical shapes of the trees, the natural illumination, the effects of the wind on the tops of the trees, … together with the religious traditions, certain social practices and the famous legends are source of narrations of paranormal phenomena, awakening the dark side of the imagination.

Suicide Forest stage for the paranormal

If we left the marked trails and went into the forest, which is not advisable, we would find a forest in its natural state in which all directions would be the same so it would be easy to get lost.

The volcanic substrate on which the forest develops is hard and, above it, the trees grow with shallow roots that extend chaotically. These roots together with the trunks can produce whimsical shapes, such as an eight-tailed snake, a deer,…

In Aokigahara, we can find a poor and cold illumination, dark caves, plants that do not contain chlorophyll and are entirely white and look like the fairies of the forest,..

Wildlife is scarce and this makes the forest a tranquil and strangely quiet place, where any noise is easily audible. These characteristics make Aokigahara the prototype stage for a mystery or fantasy film, or even horror. Proper proof of this can be seen in the collection of photos taken, inside the forest, by Tomasz Lazar.

In the Japanese tradition, there is an essential collection of spirits that suffer between the world of the living and that of the dead. The manga and the anime have been inspired by these spirits to develop their stories.

The yūrei They are the Japanese ghosts. They are specters in pain for something that happened to them in life, or for the absence of a funeral, or for suicide. The form of his death or the motive that pushes them back to earth determines the type of yūrei in which he manifests.

The yūrei are feminine, pale and translucent figures that act at night and are dedicated to frightening those who hurt them. They lack feet and move levitating.

They are intimately linked to the place where the death occurred, and they can only abandon it once the pending account has been repaired.

Aokigahara Forest is, according to tradition, one of the places frequented by these ghosts.

Let’s recap: We have secular traditions that tell us that “ultralife” of spirits and that are rooted in popular culture. We also have, as we discussed in a previous post, with a possible location of the underworld; with a place where the ubasute was practiced and which, at present, is (sadly) famous for the suicides that occur in it. Finally, the scenario has environmental characteristics that awaken the dark side of the imagination.

So, it is not surprising that in this breeding ground germinate experiences, such as the appearances of ghosts, people endowed with particular sensitivity to visit the Suicide Forest. 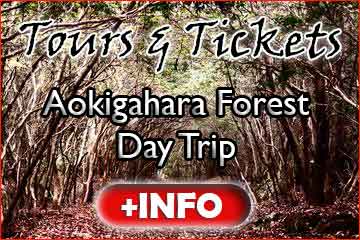